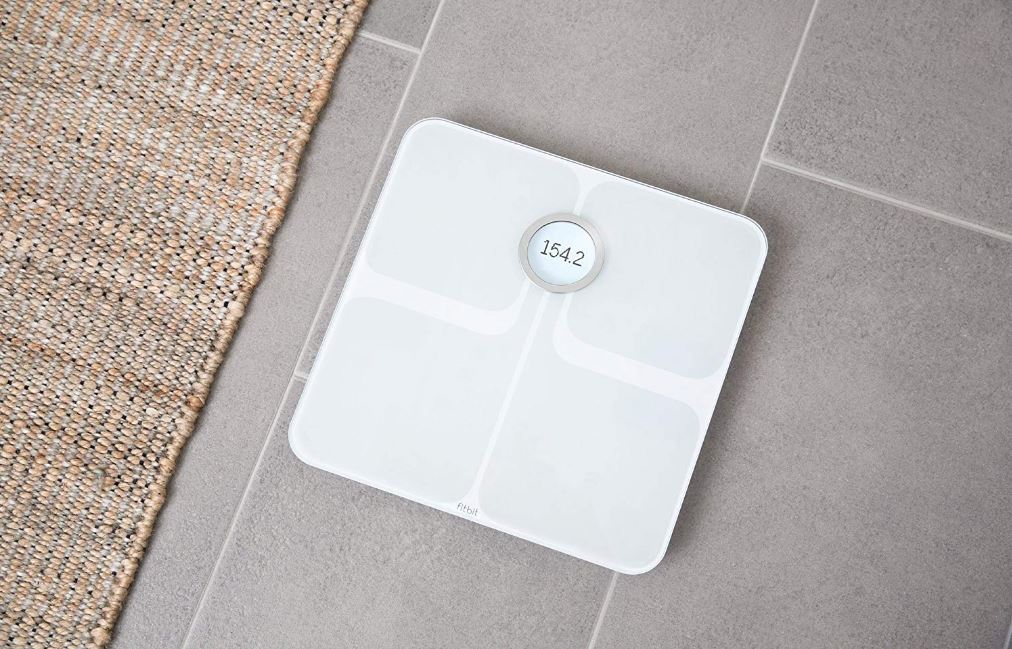 I’ve been looking for some body scales that come with an app for a very long time. I recently received a Fitbit Aria 2 for my birthday (as requested by myself to my brother, thanks bro!) I wanted to share why I decided on the Fitbit Aria 2 in comparison to other smart body weight scales on the market. Also to give a brief review of my experience with my Fitbit Aria 2 scales so far.

Before I had the Fitbit Aria 2, I had the standard (non-app) digital scales – Weight Watchers Precision – which has served me perfectly whilst recording my progress manually by 2 methods.

Recording your weight manually is easy (when you remember), but with the technology available nowadays, you really don’t have to. The other bonus is the graphs and charts that the apps have to analyse your body weight/fat progress.

There are an abundance of smart body weight scales on the market with apps for recording weight and body fat at varying price ranges.

I narrowed down my choice to three and made comparisons before making my final decision on the Aria 2.

See my full comparison on the above 3 scales here.

Why choose the Fitbit Aria 2?

The main driver for me is that I own a Fitbit charge 2 watch. So what I wanted was something that I can integrate with the Fitbit “ecosystem”. For example if you had; a Samsung, an Apple or a Withings watch, you would probably want a body scale that seamlessly integrates with those products.

The Fitbit Aria 2 does this for me. Why this is important is because in the past, I have had apps where they sync with each other. Which wasn’t too much of an issue, but what I found was sometimes there would be syncing issues between apps. There would either be a delay in information syncing or it wouldn’t work at all. So I personally wanted a fully Fitbit ecosystem for storing and recording data from my Fitbit charge 2 watch and my body scales.

Opening the box you come across clear instructions on how to set up your new Aria 2 body scales.

There is also a very large warning label wrapped around the scale. It states you should not use this scale if you have a pacemaker or are pregnant or under 13 years old.

I did more research with regards to why you shouldn’t use this due to pregnancy as this is something I’m planning myself for the near future. The warning is because of the bioelectrical impedance analysis (BIA) method used to measure body fat. Essentially its a small electrical current it sends through your body to measure body fat. In a Fitbit forum, a Fitbit moderator added:

The Aria uses bioelectrical impedance to measure body fat, which sends a minor electrical current through your body, and is generally considered to be very safe.

That being said, we do not recommend that anyone with a pacemaker use the Aria because of this electrical current. Likewise, we advise any pregnant women to consult their physician before using the Aria – not because any harm is likely to occur, but simply because each person’s body is unique, and it is worth asking a doctor about your specific situation before making such decisions.

Though there isn’t currently any scientific research that says scales which use (BIA) are harmful during pregnancy, there are also no studies out there to say it isn’t harmful. Thus manufacturers of scales do put a warning labels as a precaution. I’ve also read somewhere that it may also be because the scales are inaccurate during pregnancy too. I think overall its better to be safe and consult your doctor before using the Aria 2 for pregnancy.

If you don’t have the Fitbit app, download it and open it up and just follow the instructions to add a new device. If you already have the app like me, which is connected to another device, you need to click on your settings symbol at the top right hand corner of your app and click “set up device” and follow the onscreen instructions.

When you are setting up for each user you can pick an icon to represent you on the scale, there are 16 to choose from, for example a cat, gold fish, butterfly etc. This is so you can differentiate between each user.

Make sure you place the scale on a hard surface. Please note, this scale does not come with carpet feet like some other digital scales. To turn it on, you simply just step onto the scale and it will show some vertical lines telling you its measuring. It will then show you your weight. If you selected pounds or kg, It will show you your measurement. However if you selected stone, it will show you stone first followed by the number of pounds after the stone display. It will then show you body fat percentage and followed by your icon.

There was a slight issue where one family member stepped onto the scale, but the icon of another family member was showing. This was because their weights were too similar, only just 1lb difference. If this happens all you need to do is adjust it in your app after you have weighed yourself. Go into settings, click on your “Aria 2” device and under “Recent Weigh-in” you can select the weigh-in that was incorrectly assigned. Just re-assign it to the correct user. You can even have guest weigh-ins too! So technically not limited to 8 users.

Overall I think the Fitbit Aria 2 smart body scale is great. It’s easy to use and the whole thing looks sleek and amazing. I would have to admit its a little expensive for the features you get in comparison to other smart body scales. However, great for Fitbit users. No more manually recording my weight!

I will update this review once I’ve had a proper chance to use the scales fully.

Since my review back in April, I’ve now had a good chance to use the scales and I’m still very happy with them.

The main thing for me is these scales really take the ease out of remembering what your weight is whenever you’ve weighed yourself. No more writing it down or remembering to put it in your app. For example if you’ve woken up late and are rushing to work, simply step on the scales and off you go. You can always come back to your app later to analyse your progress.

The white version really compliments my bathroom and for some reason a conversation starter. I’ve recently moved house within the last year and a half. Whilst giving house tours, many have ask or complimented how sleek the scales look.

Connection to the Fitbit App

My weigh-in stats have always synced to my phone without any problems. As soon as I step of the scale and load my Fit Bit app I can see my results pretty much instantly.